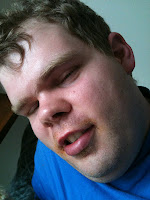 Yesterday, I took Lacy Alan to his psychiatrist.  Kenny and I had decided that we would always both try to go to these appointments, but that wasn't possible yesterday.  So I arrived at Lacy's apartment an hour before the appointment to get him there.

He was very fatigued and could hardly open his eyes, but he was in a good mood.  I promised him a trip to Sonic after the appointment and he was happy.

Everything was going so well...I should have known it wouldn't be this easy.

On the way, Lacy began to ask if we were going to see "Doctor James" who (in Lacy's mind) is his "new" doctor.  All the other doctors he has have been arrested and put in jail - at least that is what our son believes.

Once we arrived at the appointment, "Dr. James" told Lacy to just stay in the car.  And there he stayed...calmly waiting with his hands folded in his lap...turning every few minutes to confer with Dr. James who seemed to be located right outside the car window.

Kenny called as "Dr. James" (desperate measures for desperate times) and for a couple of minutes we thought we could convince Lacy to go to his doctor, but soon the jig was up, and we were back to square one.

I called the doctor's office to let them know we were in the parking lot.  To my relief, the doctor came walking out and persuaded Lacy to come in for the appointment.  "I'll come in to see that crap doctor, but I will ignore him."  He did just that.

The real showdown began after the visit when we made a follow up appointment.   Once we were in the car, Lacy began to scream at me "Tear up that card!! Get rid of your stupid notebook!!"  He was loud and intimidating.  I had to ignore the "Do it now!"  screams.  As suddenly as the anger developed, it stopped, and he was again quiet, though not particularly happy.  I didn't order the right thing at Sonic, and the tirade began again.  When we arrived at his apartment, he wouldn't sit down to eat, and mumbled about how I had "vandalized" him.  I was tired of fighting battles, so I hugged him and left. 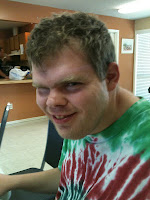 What a contrast to Monday. Lacy came home with us and was happy most of the time, but needed to go home after a couple of hours.  We brought barbecue to him and he ate (sitting down) in the support center;  he was happy and content.

I don't take the yelling personally because I know this is not our son.  His brain is betraying him.   It doesn't mean that this isn't exhausting for Kenny and I, but I know the confusion and anger is exhausting for Lacy, too.

Many families deal with personality changes, anger, delusions and paranoia.  This is indeed a family disease.  The battle is personal, but taking the rants and raves personally makes it harder.  Although it is a neurological disease (like Parkinson's) the effects are not only physical but also mental and emotional.  A person with HD loses the ability to reason, react, move, and eat.  All at the same time.

I sometimes have no words for a prayer.  I find myself just sitting silently in God's presence.  I don't know how to pray, but I know that He knows my heart.  He knows and loves Lacy so much, and will not leave him.  Kenny and I take lots of comfort in God's faithfulness.

I thank the Lord that we have such a wonderful group of family and friends who care about us and love our son.  What a great group of folks that care for our son every day at his apartment, and are so dedicated to his care.  We are blessed to have dedicated, knowledgable physicians and professionals to assist us as we stumble through this minefield.

The Good Samaritan and Inspector Javert

June 24, 2019
This last weekend, Kenny and I went to a performance of Les Miserables at Walton Arts Center in Fayetteville.  This is the third, maybe fourth, time we have seen this production live.  As usual, the play did not disappoint, but I came away with a totally new view of Inspector Javert.

If you have not seen the play, Javert is a pious police officer who sees the world in black and white.  People are good, or they are bad; they follow the law, or they break the law.  In Act I, Javert pursues Jean Valjean over the span of decades, intending to put him back in prison after Valjean breaks parole.  Valjean's sentence: 19 years for stealing bread.  Never mind that Valjean's nephew was starving, and it was an act of desperation, or that in the intervening years, Valjean has become a kind and benevolent mayor. Javert believes "once a thief, always a thief" and he has no mercy.