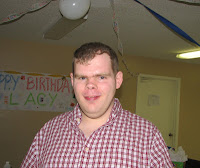 We had a huge party for Lacy on Friday, with family and friends in attendance.  He had a great time, and was very happy.  When we sang "Happy Birthday" to him, he grinned and rubbed his hands together. 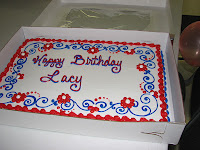 I was remembering the spring and summer we brought Lacy home to live with us, and a song that will forever remind me of that time.

We met our son one cold afternoon in February of 1982.  He was sitting on the wooden floor, in front of a big picture window.  The sunlight on his white-blond hair created a halo around his head.  Lacy Alan was three years old.  He sat there, spinning a pair of scissors and laughing at the motion.   We sat down on a sofa fairly close to where he was playing.  When we said his name he froze, and stared at the wall.  Kenny and I didn’t make a move to get closer to him at that time, but just stayed where we were, talking briefly to him every few minutes until he made the move to show us what he was doing.  We brought him home in April of that year.  Slowly, Lacy began to speak to us, and we were able to develop a deep relationship.   That summer, the song “He’s So Shy” by the Pointer Sisters was playing all the time on the radio.  The lyrics reminded me of the careful way we had gotten to know each other and how the three of us had eventually become a family.  “Something inside whispered to me, ‘You’d better move in carefully.’ Then when he smiled and turned away, that told me all he could not say.  That’s when I knew he wanted me too, but I had to do some breaking through.”  I would often sing along with the chorus as Lacy and I drove to the store or to a doctor’s appointment.  “He’s so shy!  That sweet little boy who caught my eye.”  One day he asked me “Mother, what is that song about?” “That’s your song, sweetheart,” I told him.  Even today, if he hears that song on the radio, he flashes a big smile and says, “Mom, they’re playing my song!”

Thank you, Lord, for the wonderful gift that is Lacy Alan Goff.

The Good Samaritan and Inspector Javert

June 24, 2019
This last weekend, Kenny and I went to a performance of Les Miserables at Walton Arts Center in Fayetteville.  This is the third, maybe fourth, time we have seen this production live.  As usual, the play did not disappoint, but I came away with a totally new view of Inspector Javert.

If you have not seen the play, Javert is a pious police officer who sees the world in black and white.  People are good, or they are bad; they follow the law, or they break the law.  In Act I, Javert pursues Jean Valjean over the span of decades, intending to put him back in prison after Valjean breaks parole.  Valjean's sentence: 19 years for stealing bread.  Never mind that Valjean's nephew was starving, and it was an act of desperation, or that in the intervening years, Valjean has become a kind and benevolent mayor. Javert believes "once a thief, always a thief" and he has no mercy.